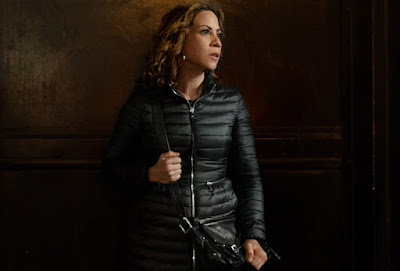 Man listen, Episode 12 that had the viewers following Paz's journey with Angie's murder and trying to deal with her feelings toward Ghost was another "meh," episode writing-wise, but it was more like two (2) "mehs" versus one because it wasn't totally forced like the Dre episode lol.  Anyway, let's get into it with my rundown as it happened!

1- It’s crazy that Paz just pulled up to Tasha’s house and started talking about taking Ghost down.  Ghost had ZERO loyalty from everybody.  They all just openly plot on him like they don’t know him lol.

2- Is the gun that Paz got out of Angie’s box, the gun from the penthouse that Angie was holding for Ghost?

3- There’s no way Paz was so dense not to see that Angie was clearly helping Ghost stay out of jail.

4- Why do they always cast these old ass teenagers to play younger kids.  They had former NY Yankee, A-Rod playing Angie’s nephew lol.  He’s a whole grown ass man.
5- Not the exhuming of Angie’s body! SMH. OF COURSE the phone would be fried. You know how much moisture and shyt seeps into a casket in the ground?!

6- Dang Paz blew it by not being focused.  No wonder she seemed so skiddish in the original scene.  However, I never thought she was wired.

7- LOL at Tommy kicking Paz out and saying he would "call the cops"!!! Who wrote that?! lol Tommy would NEVER!

8- I wish I would’ve counted how many times Paz pulled that gun out to make sure it was still in her purse lol.  Biiiihhh it's still there shawty.  She was grabbing that joint more than ratchets pat their itchy weaves, waiting on a Popeye's Chicken Sandwich.

9- Damn, Ghost must’ve hit Ramona with the deep stroke because her eyes were glistening with love when she said he was unstoppable! She was riding for her boo HARD!

10- I like how the Valdez Family forms sentences and have conversations in half-English and half-Spanish, just like real NY Puerto Ricans lol… perrrooooo….

11- The DNC pulling up to support Ghost was a cool lil addition.  I thought the DA was going to eventually be dirtier than he ever was, but he stayed pretty legit the entire time.  They offed him very civilly, but I’m mad he was never able to truly get Saxe out of the picture.

12- Oh shyt! Where the hell is Tommy?!  I didn’t see that coming.  Where could he escape to?  I guess he has no ties to NY anymore, but my original thought was that he was going to run off with the Serb after Tariq killed Ghost, but the Serb is dead now, so dayum…  I have no idea of how to process this.. WAYMENT, since Ghost is leaving everybody money, he must’ve left Tommy some money, so Tommy said fawk it, took the payout and bounced!

13- Paz should’ve definitely took the money because Tasha clearly shot or set it up for Tariq to shoot Ghost.  I think they made it clear with Ghost’s and Tariq lil final spat about Ghost killing that guy who wouldn’t take the last warning, that Tariq was going to use that against him.

Ahight that's all I got.  Till next time, make sure you go sign up for my newsletter and don't drink and drive... you might spill some. #Logawt

Posted by Cousin Cornbread at 7:04 PM