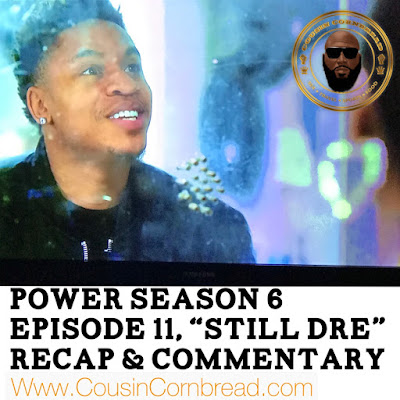 #Power #WhoShotGhost #PowerReviews #CousinCornbreadReviews Man listen, we've waited for a couple of months for Power to come back on, and to start getting closer to finding out Who Shot Ghost, and the writers came through with the "Meh" yet again. Geez. Here's my rundown as it happened!

2- “I ain’t no snitch” has always been the dumbest street code in the world because somebody definitely always snitches and the others suffer for it.  In real life there are ZERO rules and codes that are upheld in the streets.  Save yourself. Worry bout yourself!

3- Tariq’s acting skills are terrible, and I realized why.  He says the lines like he reads them directly off of the cue cards with no inflection or emotion based on the context or situation.


4- All of these dudes are small as fuk lol.  Maybe they’re showing more full length shots but between Tate, Spank (Spotswood), and Tariq, these bamas are petite as fuk lmao.

5- The cops letting Dre take a piss under a bridge unsupervised and not caring to try to track him down was so ridiculous and unrealistic lol, but aye that’s TV Magic.

6- Dre broke into his mama’s house to steal her jewelry and then flips it on her being a bad mom and calling him names?  Talk about a dysfunctional relationship?!  Bravo for that mindfuck. That’s how some of y’all’s boyfriends and girlfriends be playing y’all every month and got you posting those dry ass whining relationship memes every week lmao. Get ya mind right! Know your worth queens and kings!

7- Tate paying Dre to kill Ghost was totally unexpected, but I liked the insurance of knowing Dre’s new identity; but again, wouldn’t Tate have known that Dre escaped protective custody?

8- Okay, so neither Dre, nor Blanca shot Ghost, but why did Dre just straight snuff Blanca like that coming out of the club? LMAO.  Didn’t she just get him out of jail?  These mawfuggas ain’t loyal! SHEESH!

9-  Why in Black Jesus’ name would Dre stop at the gas stations for FUNIONS under these circumstances?!

11- This is going to sound bad, but Thank God Dre is dead! He survived like 4 Seasons too long with the help of Tariq’s dumb ass tipping him off trying to be a bad boy.

12- Damn I can’t believe Ghost was ACTUALLY MURDERED!  They didn’t waste any time revealing that.  Now I feel like there’s really no reason to watch the rest of this series.  If Ghost is dead, there’s really no Power.  It’s like watching the The Fresh Prince of Bel Air, when they brought in the new Aunt Vivian .. what’s the point?!  I think it’s clear just off of this episode that Tariq is going to eventually be revealed as the one who did it (maybe with help from Tasha and Tommy.). Right now, we know that minimally Tate, Dre, and Blanca are all not the shooter, and highly doubt it was Angie’s sister.  So I’m guessing that Tommy and Tasha and Tariq actually made good on their lil “family” pact to kill Ghost.  We’ll see.
Posted by Cousin Cornbread at 6:07 PM