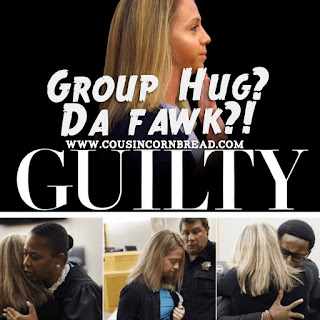 Former Dallas Police Officer, Amber Guyger was found guilty of murdering an unarmed man in his own apartment WITH her SERVICE WEAPON, while she was OFF-DUTY.  It was a shock to the public that she got convicted because white police rarely get convicted in cases where the victim is non-white, especially if the victim is BLACK.

So, while the jury did a great job at not letting yet another cop go free and unscathed after committing murder-on-the-job, this same jury completely blew it on the sentencing of Amber The Apartment Hunter Guyger.

Y'all have allowed Caucasity to win again!

The fact that she didn't get at least 25 years for breaking and entering into a man's house and murdering him is preposterous.  10 years with the chance of parole after 5 years is a slap in the face to the public, and shows that "justice" is NEVER applied equitably to white offenders, especially white offenders who are sworn to "protect and serve" as police officers; especially when the victim is non-white.

The jury got it right on the murder conviction, but just gravely fumbled the sentencing.  It's like in National Football League (NFL) when the receiver has to complete the catch AND make a "football move" for it to count.  In this case, the jurors made an Odell Beckham Jr. type of catch, but didn't control it through falling to the ground.

As this is the case, I've updated my US Legal System Win Totals accordingly below:

Fake Positive Note: Don't worry guys, I'm sure the good cops will make sure her stay in jail is a rough one for disrespecting the shield.

P.S. I saw a headline that said that Botham's family hugged and forgave the murderer.

Nah B! WHY IN THE WORLD IS EVERYBODY HUGGING AND CONSOLING THIS COLD-BLOODED MURDERER?!  This is outrageous!  People are dead-ass empathizing with this grown adult who recklessly murdered a man in his own apartment.  This highly-trained officer of the law, who irresponsibly pulled her weapon and started shooting instead of presumably not attempting to even find out who this potential intruder was or if he was a threat? STOP THE MADNESS!

Having empathy for someone who has caused me extreme trauma is not in my DNA! AT ALL!

I just want y'all to know that if I get killed by the police and I wasn't in a whole shootout transporting money for the Colombian Cartel or "Ghost" from POWER on STARZ, I DO NOT want y'all hugging it out with ANYBODY and you shall NOT FORGIVE THEM. I want you to go to their house and bomb on their ass and their family, and burn THEIR houses down and pee on the courthouse steps. Phuck dat! If y'all forgive or hug them, I WILL HAUNT YOU and shake your bed, and clear out your cabinets once a month!

#LogAwt
Posted by Cousin Cornbread at 11:07 AM