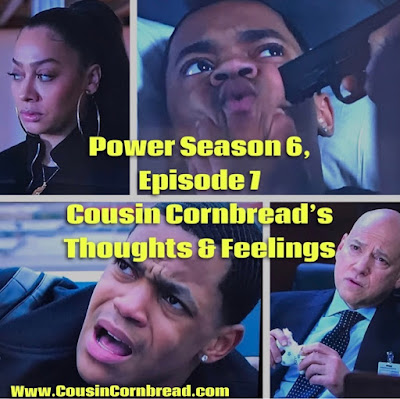 1- I’m so glad Ghost finally pulled the strap on Tariq, and took his money. He should’ve pistol-whipped him tho! Just like one-to-three hits in his sore ribs with the gun handle. Grab him by the throat and be like “you’re luck you’re my son lil messy ass phuck boi!”

1a)LOL at Tasha’s “Okay Ghost” when he dead ass thought he got through to Tariq.  Tariq STILL ain't shyt!

2- Keisha gon hold that gun in her bag till 2037.  Her accusing the workers of stealing is exactly why she shouldn’t be involved in the biz.  However, the writers actually made LaLa have some good insight and value in this episode.

2a) Tommy’s Worker Spanky is one of the best actors on the show.

3- Tate is hot as hell for smashing campaign worker Derrick’s wife Cassandra, but I’m glad Ghost didn’t kill Derrick, like O-Dogg tried to get him to do.  YES, I'm calling Tate O-Dogg from now on since he's acting very Menace II Society-ish recently.

4- Tariq is super fawkin annoying meeting with Dre, but I’m glad that Tasha has finally given up on him being a “good” kid and said phuck it, we’ll teach you the family business! This is a good angle to to take by the writers to setup the spinoff for Tariq taking over. This also plays well with Jason, The Serb Distro telling Ghost and Tommy that they aren’t ALLOWED to kill each other.

5- The new California Connect, Raldalpho Ramirez was mad random. So my original theory of Tommy going to Chicago, is now clearly switched to LA.

6- Why is Ghost always pulling up on everybody in parking lots? Lekeisha should’ve took Ghost’s money and skipped town, but where the hell did he get extra money to potentially pay her off? He barely be paying The Serb on-time! Da hell?!  He needs a financial planner!

7- That damn toy unicorn for Proctor’s Daughter Lisa Marie has made a comeback, but NOT how Saxe wanted it to! Saxe is technically done, but I feel like he’s going to do something desperate and messy to bounce back. I also still don't trust the new DA, but I fux with Blanca.

7a- Although the unicorn has been used, how will the SD Card in Lisa Marie's necklace make an impact?

When Saxe put that ankle bracelet on Dre and said “I now pronounce you my lawfully wedded snitch,” that was funny.

Dear Saxe, “Your incompetence is legendary!”

8- Every time Tariq says “I’m scared,” I roll my eyes allllllll the way to the back of my head lmao. Phuck this kid mayne!

9- When Tommy hung Tariq off that roof I was soooo happy! Like everybody is finally done with his shenanigans!

Also when Tommy listened to Keisha’s passionate diatribe about a better life outside of the drug game and then said “Now grab his legs” to hide the hitter’s body was funny.

10- RIP to Gremis, he’s another one that wasn’t really cut out for thug life smh.

Dre is always killing somebody that tries to help him smh. Him and Tariq are the worst!

11- There’s no way that they can really kill Jason The Serb Distro right? Who will be the distro, the new Mexican from Cali?! Hmmm...

Overall I think everybody is satisfied with the writers finally giving us what we've been begging for in regards to Tariq and LaLa.  I give the writers props for this one because they were starting to trend back downward to the "y'all doing TEW MURCH" category.

Posted by Cousin Cornbread at 12:15 AM