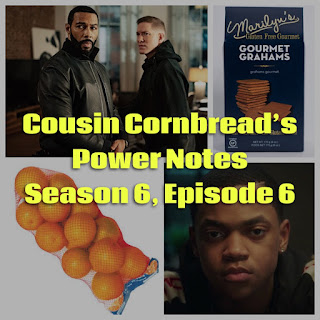 1- Yo! Tariq trying to double-cross his daddy, his mama, AND his uncle is CRAZY! Y’all thought I was crazy when I said if I were Ghost I would’ve killed Kanan, The Lesbian DC Cop, and Tariq all at that house years ago lmao. Tariq just ain’t never gonna be shyt! You know you can’t trust him based on those shady pointy eyebrows!

He deserved way more than that beating with the bag of oranges. I was so hype when I thought Vinny was gonna stab him, but of course it didn’t phukin happen!!!!

2- I’m glad that Tommy pointed out how ludicrous it is for he and Ghost to act like everything is cool just because it involves Tariq now.

3- Lakeisha and Tasha’s relationship is so on and off, and they are still forcing Keisha’s character being “down.” Smh Girl Bye. She’s a whole Tekashi69 Jr.

4- The idea that they could clean $2M in 24 hours through a fawkin Day Care and a Beauty Salon is outrageous. How much are they charging per head at these spots. They're doing HAIR hair at the salon, and serving gourmet graham crackers and luxury apple juices at the day care?! Lol stawp!!!  I guess Tasha running the drugs through Stripper Epiphany is legit, but they're still not doing a milli through the strip club exchanges lol. #TVMagic wins again!

5- Dre casually stabbing that corner boy with the switchblade was so random and hot as fuk. I’m sure some Fed got that on camera. Lol

6- The exchange between Ghost and Tommy about what would happen after they got Tariq back was weird and non-committal lol.. I mean is it on like popcorn or NOT?!

7- I’m tired of the Serb, popping up at the wrong time.

8- This whole 24 Hr deadline for all of the over-lapping payments was irritating!

9- The emotionless non-familial energy between Tasha and Tariq during the exchanges with Vinny and then the detectives was so dry and terrible.

Y’all think Keisha’s acting is terrible. Tariq’s acting skills are trash too lol... no range or inflection in his voice.

10- That exchange about the sex tape at the club robbery was weird. That scene like a lot of them in this episode was way too long.

11- Good job by Ghost to bring the strap for Tate, but aren’t guns like impossible to legally possess in NYC? Is Tate grandfathered in because he’s an ex-L.E.O.?

12- Did Ghost effectively clear Tommy from suspicion with Benny? I would’ve thought Benny wouldn’t believe that since he knew Proctor was scared about Tommy coming for him.   Anyway, why isn't Tommy grateful that Ghost sent Benny away from him onto another trail?

13- Are we to assume that Ghost is now living in the trap apartment with Tasha?

Lawwwrd these writers are doing too much.

Til next time folks.  Thanks for reading!  Make sure you comment and share!  Also, go listen to or watch the "Sex Travel Sports Food Podcast" available in BOTH audio-only and video at www.CousinCornbread.com

#LogAwt
Posted by Cousin Cornbread at 12:27 AM