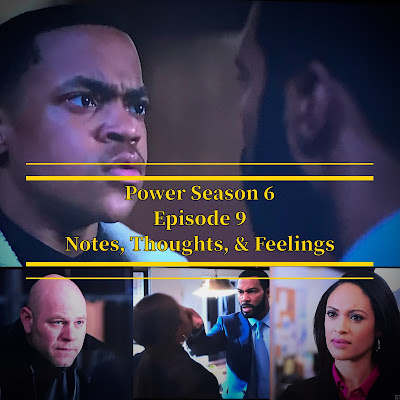 1- Do we know anything about Lakeisha’s Baby Daddy? Would he really be of any use to Tommy? I don’t remember him at all. Also, when did Tommy get that yellow car?

2- Ramona is proposing Ghost as Lieutenant Governor tho?! This is so extra. He’s way too hot and unraveled right now to be a real public figure. He’ll be the poster-boy for Blackmail Bait. The drug dealing teacher and O-Dogg Tate will have stuff to hold over his head in any capacity as a public official. However, we finally see what Romona’s purpose has been. She has finally jumped in on the backstabbing! Lawwd geezus!

Larenz O-Dogg Tate is going to try to kill Ghost! When Romona told him she was leaving he looked very distraught; way different than the swag he had when he hit Ghost with that “you ain’t gon do sh!t boy!” Lol

3- The plan to get Jason, The Serb Distro to the new building was genius. Ghost getting Dre to come to the roof was a good move, but then TV Magic made it so that somehow Dre escaped a surrounded building from the roof when the police were downstairs and upstairs?!

Why would they need Dre to plant the phone at Ghost’s hotel to get him on Silver? Wouldn’t the phone have whatever evidence they needed? Wouldn’t it better to find the phone in the car WITH the dead body?

Ghost WOULD NEVER drop a big ass SAMSUNG NOTE or iPHONE 8PLUS at the scene in the car.  The writers are getting lazy again mayne!

Overall, Dre is just as irritating as Tariq, but at least he has a reason to be shady being a real competitor for Ghost. Tariq is just an ungrateful lil asshat for no reason. He literally has no reason to hate Ghost the way he does.

4- The teacher was definitely low key letting Ghost know what was going on with Tariq moving pillz through the school.

5- So TV Magic made it do that nobody saw Tommy’s Casper The Friendly Ghost Skin Tone ass peering from behind that fence at the warehouse raid?! Lol Stop! He wasn’t even trying to hide lol. Also if the workes saw him hiding and felt setup, why wouldn't they just yell out, "AYE THERE THAT MUTHAPHUCKA GO RIGHT THERE!!!" to the cops so that they ALL get locked, instead of just scowling through the backseat window like some chumps?!

6- Tasha’s Day Care Bae Q’s, character is so under-developed, but I’m feeling like he’s definitely a Fed or works for some random threat that we don’t see right now. He’s so random and popped up out of nowhere. Tasha is mid-key irritating with her neediness to be desired🙄.

7- The whole Family Conference where they all agreed that it was cool for Tommy to kill Ghost was weird like it always is when they’ve had their own individual meetings about it. See this is why Ghost just needs to kill them all and find a new Angie in Colombia or Cuba and just make a whole new family. This family ain’t loyal!

They’ve lived well off of his decisions and drug money, but now they all hate hime for it?! Fuk this family! Better yet, don’t even kill them, just leave and let them all fend for themselves. If everybody wants him gone, just get gone. He’s fighting about 4 losing wars with people that should be on his side, but everybody is double-crossing him. Smh. He can take all the money from the club and whatever he was supposed to pay to Jason, and just move to Bangkok and live in a penthouse, drama free for like 10 years eating pad thai and watching Ping Pong shows (if you don't know what a Thai Ping Pong Show is, look it up) #FreeGhost.

8- They let my man Benny die a BS death. With all of that access to hitmen he has, there’s no way he pulls up on THOMAS EGAN with a SWITCH BLADE!!!!! C’mon Maannn! Benny? The guy who shut down the whole Italian Mafia ready to kill the whole St. Patrick Family, comes to Tommy solo dolo with a muthasteppin SWITCH BLADE?! Stop the madness!!! Him and Proctor were the only likable characters and the writers did them dirty on these dishonorable deaths!

9- OMG I told y’all that we weren’t done with Saxe! He’s another one along with Tariq, that if I see them in real life, I’m putting my Pumpkin Spice Nitro Cold Brew down and swinging on him because I’m not willing to separate TV from reality in this instance!

Ahight, that's all I got for now, y'all be easy.  I feel like the writers have made a couple of strong episodes this season, but they are reaching on a bunch too and just leaving a bunch of loose ends.  They need to get me on staff! For really real! Somebody text 50 and put the word in!

Visit www.CousinCornbread.com for more greatness including the "Sex Travel Sports Food Podcast" as well as dope t-shirts, hoodies, and other cool merch like the best-selling, "Blacks For Pumpkin Spice," and the "Petty Inside" designs!

Posted by Cousin Cornbread at 12:49 PM